We tell ourselves stories in order to live.   –  Joan Didion

Stories give our lives shape and significance. They connect us with others – family, friends, workmates, community members. I read somewhere that there may be an upper limit to the number of people with whom I can maintain stable social relationships – relationships where I know who each person is and how each person relates to every other person. The number suggested was 150.

Not sure where that leaves me when it comes to social media! I have 238 Facebook  friends and 649 WordPress followers so, statistically-speaking, I’m way out of my social depth. In practice, of course, Facebook’s main attraction is private messaging and only a small fraction of my WordPress followers ever respond to my posts. My circle is surprisingly – and perhaps comfortingly – intimate.

Beyond that, I view social media as an extra pair of eyes (and ears) to tell me more about the book of the world – to discover stories that help me find my place on the page. And maybe tell a few of my own.

My previous post told the story of how I responded to a story on Facebook with a different story of my own. If stories seek to shape us, we can shape stories. Our online world may be heating up – verbal warming, you could say – but story competitions are as old as the hills.

When you’re in a bar or café, listen to any group of friends trying to top one another’s anecdotes and it’s easy to envisage a similar healthy rivalry between our hunter-gatherer ancestors around the camp fires. Who has the best stories, the ones that capture past and future in a timeless moment? Who can perform magic and banish, if only for a while, the dark?

The brighter our lights, however, the darker appears the night. Michelle at The Green Study ended her response to my previous post with a resonant thought:

I feel strongly that we must curate what feeds our minds, lest we fall prey to the same ignorance and ugly strategies.

This reminds me of something Scott Fitzgerald wrote:

Either you think — or else others have to think for you and take power from you, pervert and discipline your natural tastes, civilize and sterilize you.

We think best by constructing stories – our own accounts of how the world works. Every sentence contains the germ of a story that could grow into a whole world. Try it with any of those I’ve quoted. As Fitzgerald implies, storytelling is like a muscle that weakens with disuse. We can forget how to tell good stories and also how to tell whether other people’s stories are any good.

Looking back through my unused drafts, I found this wonderful little video of a storytelling master sharing a few secrets of his craft. No jargon and no jiggery-pokery, just a piece of chalk and some cheeky humour.

How good a writer is Vonnegut? One of my favourite passages comes from his novel Slaughterhouse Five, loosely based on his experiences as a prisoner-of-war:

It was a movie about American bombers in World War II and the gallant men who flew them. Seen backwards by Billy, the story went like this: American planes, full of holes and wounded men and corpses took off backwards from an airfield in England. Over France, a few German fighter planes flew at them backwards, sucked bullets and shell fragments from some of the planes and crewmen. They did the same for wrecked American bombers on the ground, and those planes flew up backwards to join the formation.

The formation flew backwards over a German city that was in flames. The bombers opened their bomb bay doors, exerted a miraculous magnetism which shrunk the fires, gathered them into cylindrical steel containers , and lifted the containers into the bellies of the planes. The containers were stored neatly in racks. The Germans below had miraculous devices of their own, which were long steel tubes. They used them to suck more fragments from the crewmen and planes. But there were still a few wounded Americans though and some of the bombers were in bad repair. Over France though, German fighters came up again, made everything and everybody as good as new.

When the bombers got back to their base, the steel cylinders were taken from the racks and shipped back to the United States of America, where factories were operating night and day, dismantling the cylinders, separating the dangerous contents into minerals. Touchingly, it was mainly women who did this work. The minerals were then shipped to specialists in remote areas. It was their business to put them into the ground, to hide them cleverly, so they would never hurt anybody ever again.

Fact or fiction? Like many either/or questions, this presents us with a false dichotomy. The phrase true story is itself an oxymoron. Vonnegut offers an untruth but, by running factually accurate events backwards, he presents us with a deeper truth.

You can always trust Friedrich Nietzsche to muddy the waters still further. He believed there are no absolute truths, just different perspectives:

There are no facts, only interpretations.

To take a topical example, a climate scientist who maintains that global temperatures should not rise by more than 1.5 degrees above pre-industrial levels might raise an eyebrow over this – but even science is a story constructed around observed evidence. I should add, in the interests of balance, that other stories are available.

The question is, however, whose story do you believe?

Our common sense, allied to a skilled reading of stories, rejects this ludicrous scenario – unless, of course, we have shares in fossil fuels …

Complacent? You betcha! Almost certainly, my pension depends upon investments in all manner of dodgy doings. The complexity of the modern world means we’re all complicit in catastrophe. This morning I heard climate-change activist and former Ireland president Mary Robinson admit that she was ‘a prisoner of hope’ in her belief that we can avoid disaster. Everything, it seems, depends on the story you choose to believe.

To end this ‘story’ on an upward curve, I’ll end with two amusing ‘stories’ from Private Eye magazine’s Pseuds Corner:

Xenofuturists unite! Join the Antivoid Alliance in the pink space of fugitive rationality. Explore how technology, inhumanism and the agency of noise meet a burning demand to re-open the possibilities of a divergent now.

from the Hastings Arts Festival programme

Amelia Singer will offer guests wines that have been specially paired with sections of Sue Prideaux’s upcoming biography of Friedrich Nietzsche, ‘I Am Dynamite!’

a wine-tasting event at the publishers Faber & Faber

I’ve signed you up for both of them, OK?

And no artist was more influenced by Nietzsche than Jim Morrison of the Doors. His last ever song-recording was the majestic Riders On The Storm which presents Nietzschean philosophy in a nutshell.

Life, according to Nietzsche, is neither good nor bad. It is interesting. He urges us to be creative and invent new values. ‘Nothing is true,’ he writes, adding, ‘everything is permitted.’

Morrison’s lyric suggests that life is a beautiful yet fragile mystery, without obvious rules but wide open to creative interpretation. His song’s dark imagery nevertheless has the power to Enlighten if we can only – as he urges elsewhere – break on through to the other side. He took the idea that we’re thrown on to the earth from philosopher Martin Heidegger.

Here’s the song, followed by a transcript of the words. There may be no commandments  but, in the free spirit of Jim and his mentors, I’ll end this post with 10 possibilities for artists:

Riders On The Storm

There’s a killer on the road
His brain is squirmin’ like a toad
Take a long holiday
Let your children play
If you give this man a ride
Sweet family will die
Killer on the road, yeah

Riders on the storm, etc.

art holds up a mirror to nature

intuitions give rise to explanations

character is choice under pressure

create as if life depended on it 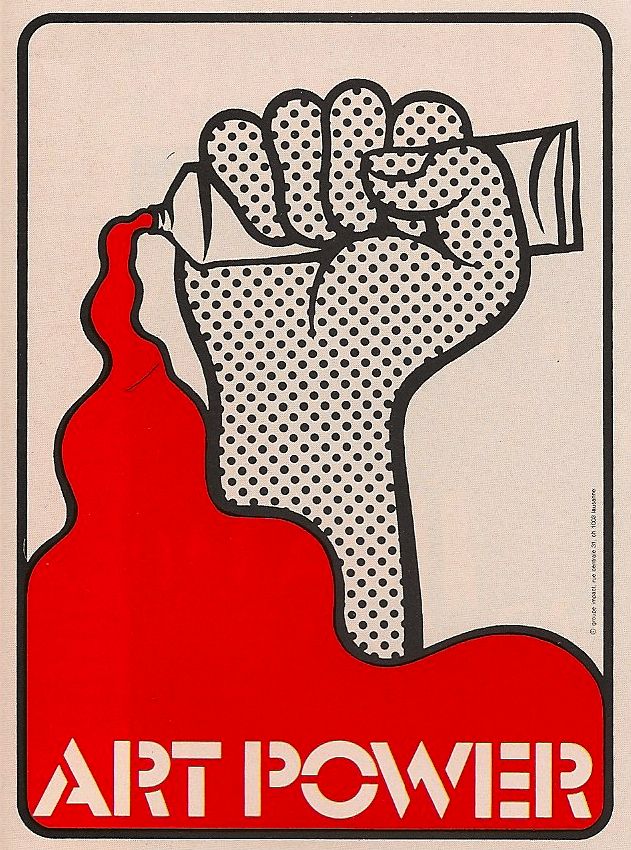 My recent trawl through stuff I’ve copied down unearthed this little puzzle:

What if some day or night a demon were to steal after you into your loneliest loneliness and say to you: “This life as you now live it and have lived it, you will have to live once more and innumerable times more; and there will be nothing new in it, but every pain and every joy and every thought and sigh and everything unutterably small or great in your life will have to return to you, all in the same succession and sequence – even this spider and this moonlight between the trees, and even this moment and I myself. The eternal hourglass of existence is turned upside down again and again, and you with it, speck of dust!”
Would you not throw yourself down and gnash your teeth and curse the demon who spoke thus?… Or how well disposed would you have to become to yourself and to life to crave nothing more fervently than this ultimate eternal confirmation and seal?

If you did know then it wouldn’t be exactly the same, would it? You’d be able to tweak your actions and responses like Bill Murray did to come up with a different outcome. If you didn’t know then it wouldn’t matter how many times you lived it because it would always come as a complete surprise. Also unexplained is whether the demon allows you to go on living some more after he’s told you of the eternal recurrence, thereby giving you the chance to make your life one worth reliving.

Maybe I’m overthinking it. What if? is always hypothetical, releasing us from the deadly grip of realism in our daily lives. Nietzsche came to reject all supernatural and metaphysical beliefs but he was open to the idea of heaven on earth, the possibility of which his imperfect but thought-provoking little scenario above seems to signal.

Me, I haven’t a clue what my reaction would be … gnashing and cursing … grinning and craving … who knows?