It won’t surprise you to learn that this crotchety old-timer gets the heebie-jeebies every time he hears auto-tuned vocals or machine-generated beats. Most of us love the music that was around when we came of age and my tastes were formed when the usual method was to record several live takes and pick the best one. Overdubs were cheating and it took high-calibre artists like the Beatles, Beach Boys and Jimi Hendrix to convince us multi-tracking was OK. You can imagine my horror, therefore, that a key influence on the 1960s blues-boomers (Stones, Yardbirds, Animals, Eric Clapton, Peter Green and the rest) may have had his recordings doctored by the money-men in pursuit of filthy lucre. Here is the shocking evidence, illustrated by short sound-recordings:

“An abiding mystery about Robert Johnson is the rpm conundrum. Is it true, as a Japanese musician told me it is widely held to be in Japan, that Robert Johnson’s records play way too fast? Should he actually sound much more like his great mentor, Son House?

If we turn to ‘My Black Mama’ by Son House, the song on which Robert Johnson’s ‘Walking Blues’ is based, we find that on his recording of it in 1930, Son plays in open G, capo on the first. 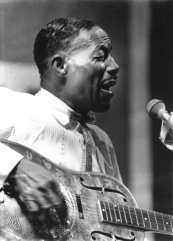 What happens, then, if we slow Johnson’s record until it is in the same key as the song it’s modelled on?

For me, this is a music transformed. The sound of a man, first of all: this dark-toned voice would no longer lend credence to the youth of seventeen or eighteen that Don Law, the only person to record him, thought he might be. Now, especially in the dip of his voice at the end of a line, we can hear the follower of Son House, and the precursor of Muddy Waters. Hear him pronounce his name in ‘Kind Hearted Woman Blues’ –

– now he sounds like “Mr Johnson”, a man whose words are not half-swallowed, garbled or strangled, but clearly delivered, beautifully modulated; whose performances are not fleeting, harried or fragmented, but paced with the sense of space and drama that drew an audience in until people wept as they stood in the street around him.

Robert Johnson, Come On In My Kitchen, excerpt, slowed down

The wordless last lines of ‘Love in Vain’ in this slowed form, are the work of one of the most heartbreaking and delicate of blues singers.

This is a Steady Rolling Man, whose tempos and tonalities are much like those of other Delta bluesmen. Full-speed Johnson always struck me as a disembodied sound – befitting his wraith-like persona, the reticent, drifting youth, barely more than a boy, that Don Law spoke of: the Rimbaud of the blues. Johnson slowed-down sounds to me like the person in the recently discovered studio portrait: a big-boned man, self-assured and worldly-wise. It works for me, but listen for yourself.

If the theory I’ve advanced is not completely crazy, a possible motive for speeding up Johnson’s records might have been to try to make them more exciting for an age in which the Delta tradition he came out of was already a thing of the past.”

from   The Nightingale’s Code: a poetic study of Bob Dylan. by John Gibbens

If you’ve read this far, I assume you’ve had a listen for yourself. Don’t know about you, but I find this theory pretty convincing – not least because it’s written with style and passion. Robert Johnson’s influence is undeniable but I’ve always had a problem with his delivery, which strikes me as a little heartless. The blues is at root a simple, heartfelt form that moves the listener through empathy. Displays of high-velocity picking may impress, but speed can destroy the spirit of the music just as surely as excessive volume.

Don’t get me wrong, I love heavy rock with a passion – it can unpick the knots of mad modern life like nothing else – but I can’t help thinking that a more soulful Robert Johnson could have influenced the blues and rock scene in a reflective, expressive and ultimately more human direction. We are all slaves of the machine, one way or another, and it feels like a little victory to hear the sound of a real person coming through the speakers …

In the interests of fairness, I feel I should include an alternative viewpoint. I found http://www.elijahwald.com/johnsonspeed.html after posting the above and have to admit it’s a pretty impressive counter-argument. However, it doesn’t mention the pitch experiments linked above and refers rather dismissively to ‘this story’.

Can I counter the counter-argument? I’ll take a blind stab at it. Elijah Wald admits Johnson was playing slowly when he came into the studio. The engineers would know musical tastes had changed and may have speeded recordings up to improve their appeal and fit them on the three-minute disc. This would affect everything recorded, released or unreleased. Fellow blues artists might keep schtum, not wanting to rain on the newly-departed’s parade once he’d achieved posthumous recognition. Modern experts who’ve praised him in public won’t want to rock the boat, either. The guitar-tuning arguments are inconclusive. And Johnson wasn’t playing jump-jive. This was scarifying Delta blues which achieves maximum menace at a stately pace.

If he did perform them too fast, it might have been nervousness or commercial pressure or both. Who knows? Perhaps it all comes down to what floats your boat and I’ll stick with my preference for the slower Johnson. If it turns out he really did give the music less air and time to breathe, that only confirms my uneasiness with the brusque and rather harsh playing manner. Either way, there’s no getting round his importance to the music.

But I’m not budging on auto-tuned vocals or machine-generated beats. And while I’m at it, stop singing and playing along to pre-recorded backing-tracks when performing to an audience. It doesn’t matter if you’ve recorded them yourself, they can’t respond to the live atmosphere and are – in effect – a dead hand in the room. If you want to double-track yourself, invest in an auto-loop device and learn how to use it while keeping the audience entertained.

Music is too important to be left to the technicians. 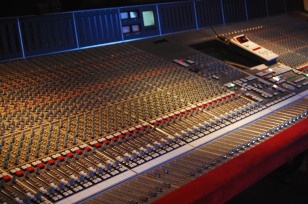 I really don’t want this topic to become a regular feature so here are all my gripes in one go:

There may be more but no list should ever exceed 10 items. By order. And if you’re thinking I’m rather hard to please, you could have a point. I was once thrown off an anger-management course for punching the organiser. He made the mistake of recommending we go see more live music …

I am standing in a dense crowd near the stage in own little musical bubble, with the funky keyboards of Booker T Jones swirling around my head. Suddenly, I am barged from behind and forced to stagger forward. A small woman has pushed past me to take a photograph of the organ maestro. I shrug and get back in the groove. It happens again. The third time, I turn to her, moved to say something polite but firm.

Me   Look, if you want to take a photo just tap me on the arm and I’ll move aside. The pushing kinda breaks the spell …

Me    Oh, and shoving me in the back without warning isn’t?

She   (leaving for the back) You’ve spoilt my evening, you have!

I turn to watch her go and am confronted by a little guy with two large henchmen.

Me     Well, actually, it’s the other way around. I was standing there enjoying the music, when …

He      Button it … there’s people here trying to enjoy the show!

That is rich. And his pet Neanderthals – no offence to that unfortunate species – manage to look offended on behalf of the whole audience. I leave, but only to find a bouncer. Once I’ve told him the problem and he’s reassured me that I can rely on him if there’s any trouble, I go back to stand exactly where I was when so – yes – rudely interrupted. The sound is perfect there and besides, a principle is at stake.

I’m trying to get back in the bubble but now I can’t help wondering why people have to take photos at moments of particular musical intensity, oblivious to the enjoyment of others around them? And why do people sitting down insist that others, inspired to stand up and dance, move out of their personal sightline to the stage when the generous thing would be to enjoy the dancers’ joyful abandon? Is visual obsession the new fascism … oh, buggeration, the gig’s over!