In this raid on the archives, I’ve paired one of my earliest posts with an unpublished draft on the French Situationists. With a bit of luck, you can’t see the join!

I find it sad that children today don’t occupy the streets and open spaces like we did when I was young. There have always been risks in such freedom but we made a habit of going around with our friends, rarely if ever alone. We knew the dangers and were able to avoid them. So many kids were out and about, there was safety in numbers. With more adults around, too, we behaved ourselves most of the time because we didn’t want to get into trouble. In this way, we learned how to take responsibility for ourselves.

Sitting alone in your bedroom is not a healthy substitute, especially when you factor in the online risks and bad cyberspace influences that would shock many parents. It’s a case of out of the frying pan into the fire, I’m afraid. Let’s make the open air a place for youngsters again, providing proper facilities and a sensible but not stifling adult presence. It would be quite a challenge but I can’t think of a better way to create the communities of the future …

Well, I said we behaved ourselves but we probably weren’t above adding the occasional daft moustache or blackened tooth to advertising hoardings that showed people leading impossibly perfect lives. We might even have changed the odd word here and there …

That ever-perceptive poet Philip Larkin captured the historical moment much better than I can:

In frames as large as rooms that face all ways
And block the ends of streets with giant loaves,
Screen graves with custard, cover slums with praise
Of motor-oil and cuts of salmon, shine
Perpetually these sharply-pictured groves
Of how life should be. High above the gutter
A silver knife sinks into golden butter,
A glass of milk stands in a meadow, and
Well-balanced families, in fine
Midsummer weather, owe their smiles, their cars,
Even their youth, to that small cube each hand
Stretches towards.

That small cube? Oxo, of course, the magic ingredient without which family life was incomplete … nay, inconceivable! 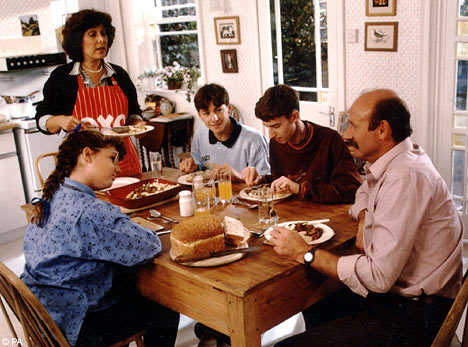 Surrounded by such propaganda, how could us kids have known that while we roamed those 1950s streets a bunch of French intellectuals were turning our natural instincts into a whole new heavyweight philosophy?

We didn’t have the benefit of Wikipedia, of course, without which the following mock-academic account could not exist:

With cultural roots in Dadaism and Surrealism – and political roots in Marxism – the Situationists believed that the shift from individual expression through directly-lived experiences, or the first-hand fulfilment of authentic desires, towards individual expression by proxy through the exchange or consumption of commodities, or passive second-hand alienation, inflicted significant and far-reaching damage to the quality of human life for both individuals and society.

Another important concept of situationist theory was the need to counteract the spectacle – essentially the mass media that reduces free citizens to passive subjects who  contemplate the world as no more than a consumable resource. The method the situationists adopted was the construction of situations – moments of life deliberately contrived for the purpose of reawakening authentic desires, experiencing the feeling of life as adventure and the liberation of everyday existence.

The dérive – a French word meaning ‘drift’ – is a revolutionary strategy originally put forward in 1956 by Guy Debord who defined it as “a mode of experimental behaviour linked to the conditions of urban society: a technique of rapid passage through varied ambiances.”

It involves an unplanned journey through a landscape, usually urban, in which participants drop their everyday relations and “let themselves be drawn by the attractions of the terrain and the encounters they find there”. Though solo dérives are possible, Debord indicates that the most fruitful numerical arrangement consists of several small groups of two or three people who have reached the same level of awareness, since cross-checking these different groups’ impressions makes it possible to arrive at more objective conclusions.

The dérive‘s goals include studying the terrain of the city (psychogeography) and emotional disorientation, both of which lead to the potential creation of Situations.

A détournement – ‘rerouting or hijacking’ in French – is a technique developed in the 1950s and defined in the Situationist International’s inaugural 1958 journal as “the  integration of present or past artistic productions into a superior construction of a milieu. In this sense there can be no situationist painting or music, but only a situationist use of those means. In a more elementary sense, détournement within the old cultural spheres is a method of propaganda, a method which reveals the wearing out and loss of importance of those spheres.”

It has been defined elsewhere as “turning expressions of the capitalist system and its media culture against itself” – as when slogans and logos are turned against their advertisers or the political status quo.

Its opposite is recuperation, in which radical ideas or the social image of people who are viewed negatively are twisted, commodified and absorbed in a more socially acceptable context.

Yeah, don’t get me started on how Tin Pan Alley moguls turned the exciting runaway underground of 1960s sounds into the long slow mogadon-music snooze of the 1970s. You’ll never hear the end of it …

I’ll end with a short clip that shows how people behave online compared with face-to-face!