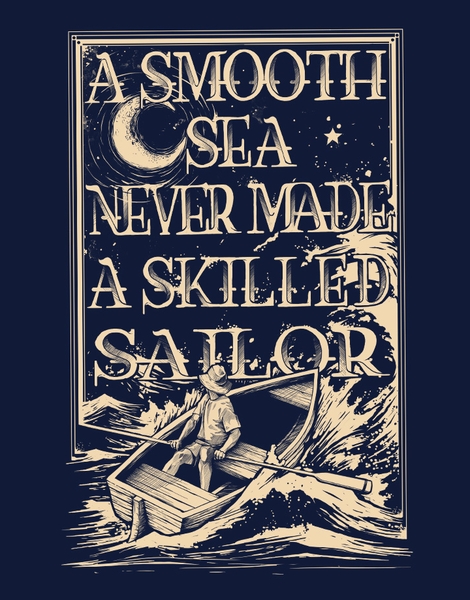 This old English proverb, famously quoted by President Franklin D Roosevelt, packs a powerful punch. No wonder it often appears on motivational websites. Chins up, people, gotta roll with them punches! When the going gets tough, the tough get going …

But we’re not talking fisticuffs here, we’re talking sailing! It always amazes me how many English words and phrases come from our proud seafaring past. Here are just some of them:

A saying similar to the one used by FDR is, Take the rough with the smooth. Bet that one has a nautical origin too!

I suppose proverbs like these stand the test of time because they express simple, obvious truths. You only learn to handle difficulties by, well, handling difficulties. Children are often, though not always, protected from difficulty but gradually learn to take the strain – another salty saying? – as a natural part of growing up.

But what if we were prevented from growing up? What if our community or society kept us in an infantile state, by chance or even intention, our only role to passively consume the untruths they chose to feed us? Buy this and be happy. Watch this and believe it to be real. Buy into the collective dream. It’s a common enough theme in plays and movies, from Death of a Salesmen to Pleasantville and The Stepford Wives.

One of the very best satires of reality television and its arrested development is Peter Weir’s film The Truman Show which features Jim Carrey as Truman Burbank, the unsuspecting star of a reality television show which is broadcast live around the clock and across the globe. His entire life has taken place within a giant dome in Hollywood, fashioned to create the seaside town of Seahaven Island and equipped with thousands of cameras to monitor all aspects of Truman’s life.

SPOILER ALERT: if you haven’t seen The Truman Show you might want to stop reading right there! In fact, if you’ve not seen it, do yourself a big favour and see it as soon as you can. Required viewing, I’d say. It often makes for uncomfortable viewing but it’s impossible to stop once you’ve started.

All of Seahaven’s residents are actors, either acting out a script or repeating lines fed to them by the show’s creator and executive producer who seeks to capture Truman’s real emotion and human behaviour, give audiences a relatable everyman and protect him from the outside world with an illusion of ‘normalcy’. We identify with Truman because the people he views as friends and Neighbors are secretly two-faced, a childish fear we can all share.

As you might expect, most of the film charts Truman’s dawning realisation of his predicament and growing desire for independence. This comes to a climax when he tries to escape Seahaven by boat. Will the executive producer continue to play God, we wonder?

Aha, you cry, here’s the link to all the nautical stuff that naughty old Nomad was flagging up and tying to the mast earlier! Well, the following clip from the film should make the connection even more obvious, though I think the proverb A Smooth Sea Never Made A Skilled Sailor has something relevant to say about Truman Burbank’s disenfranchised plight before he makes his bid for freedom and by extension asks us hard questions about how free we are who watch the watchers watching him …

15 thoughts on “Well, Shiver Me Timbers!”